Here are 7 examples of interactive advertising that highlight the power and success of using this type of marketing in your own strategy. Volkswagon, the German car company, has always been known for creativity in advertising, even from it’s earliest days. So, it shouldn’t come as a big surprise that they’d be a brand to really embrace interactive marketing.

In this ad, inside a conventional magazine, asked readers to download an app and take your phone for a test drive along a ‘road’ fold out in magazines. Trying to compete with a brand like Nike means you have to get pretty creative. Reebok decided to do just that in Sweden by creating an interactive advertising campaign that really got consumers excited.

Reebok installed a combination speed cam and a shoe display in the center of town. Then they told people that whoever ran past the display the fastest would get a free pair of shoes.

Ok, who doesn’t love pizza? Well, Domino’s the brand that really helped innovate ordering pizza online has taken it a step further in recent years. Now, Domino’s give fans and followers the ability to order via both Messenger (through a Chatbot) and over Twitter. When Domino’s announced the move, they showed just how simple it was for consumers, just Tweet a slice of pizza (that you pre-set on their website) and you’re good to go.

There’s little doubt that Serena Williams is one of the greatest tennis players ever, so it’s no wonder brands love partnering with her in ads. Few have done it better than Gatorade and Snapchat with the Match Point game. Users who played on the ESPN channel were able to interact with a 22 level ad that brought players through each of her victories.

Anyone who has considered themselves somewhat clever has tried their hand at the famous New York Times Crossword Puzzle. 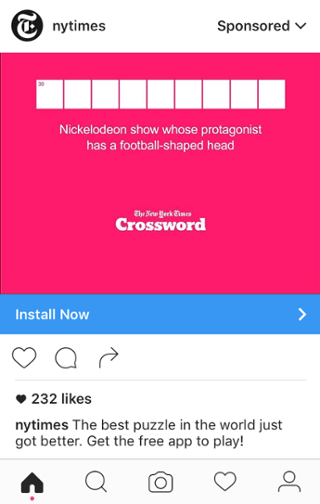 This Instagram ad was tailor-made for millenials. Not only does it call back to a show most in that generation watched, but it makes it really easy to download the fun and interactive crossword app right on their phone in seconds.

The Star Wars movies franchise is one of the most popular in the world. So, it was a very smart move for Verizon Wireless to partner with them to create a truly interactive Twitter campaign. Using the hashtags #TheForceAwakens and #TheoryWars, users were encouraged to submit their own theory in order to get a chance to win tickets to the movie.

As one of the biggest brands out there in the music industry, Spotify has millions of users who listen to their platform every single day. With the long and contentious Presidential election in the US, Spotify took advantage of a trend and made the best of it. Seeing that “move to Canada” as a search time spiked, they created a side project that allowed users to “Canadify” their playlist, recommending Canadian singers that were most like their favorites.

As you can see, interactive ads can take many shapes and forms. Their strength is in getting consumers to engage with a brand which can create a stronger and more memorable connection.

A version of this post originally published on the Zembula Blog